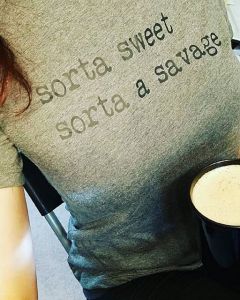 I woke up Saturday morning and realized it was already April.
I mean, obviously I KNEW it was already April but it was like my eyes clicked open Saturday and I instantly thought “How are we already 3 months into 2017?”
You see, I’ve been making moves these past few months. Big moves. Big hairy, scary moves. And I think that when you are so engulfed in making changes and digging deeper, and creating and building.. that time passes quicker than you realize.
And when that happens I feel like I haven’t done enough yet.
Which is absurd because I have literally been slaying everyday.
But then I stopped to think a little deeper about that….YES I’m an overachiever so I’m rarely satisfied BUT have I been doing enough?
There’s that word again… ENOUGH. What does that even mean? And who gets to dictate what’s enough and what’s not enough?
Let me explain something around the big circle you just read me speak in…
A couple of months ago I realized that I would cut myself some slack (more often than I’d like) because according to ‘industry standards’ I really WAS slaying it…And in comparison to the majority of people around me on a regular basis, I was doing WAY more than anyone else.
I realized I was comparing myself to others in a very different way than you normally hear about.
I was justifying only going 75% according to MY standards because that was more than surpassing 100% according to society’s standards.
Well fuck that.
So what if my 100% looks like 300% to everyone else?
Who else has the right to tell me I’m doing too much or too little besides me?
Fuck comparing and justifying.
I refuse to live any form of mediocrity and Saturday morning when I realized it was already April…I also realized that I had been conforming…even just a little bit…and boy did it piss me off!
It lit a new fire under my ass.
And I accomplished more this past weekend than most people did last week.
And today, I’m in serious #bossmode and don’t foresee that going anywhere anytime soon.
Lesson? NO ONE GETS TO DICTATE YOUR LIFE BUT YOU.
Head down. Following what feels good for you. Following your insane drive. Allowing your intuition and strong work ethic to lead the way.
Eyes on your own lane!
And back to that question from before… who gets to dictate what’s enough and what’s not enough? YOUR RESULTS.