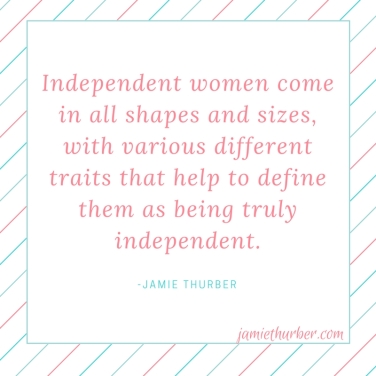 Independent woman; the concept is often misconstrued and even more often misrepresented. Independent women come in all shapes and sizes with various different traits that help to define them as being truly ‘independent’. But one thing I think that most of these woman have been faced with is men who claim to want an independent woman and then in the long wrong he can not at all handle the fact that she can truly handle things on her own. The concept that we do not need them is really not something that the majority of men can handle, no matter how much they claim that they love that trait about you. The idea of a woman wanting you to be a part of her life and wanting to share things with you just simply isn’t enough for some men and to each their own.

When I think about being an independent woman in a relationship, my concept may be a little different. What if its not about a struggle for power or dependence upon each other? What if it is about forming a true partnership to take over the world? (true pinky & the brain concepts right here) What if there are equal amounts of hustle from both parties to come together and build a true empire? To be an unstoppable power couple. Why isn’t this concept more of a common practice?

First off, there is a lack of truly driven men in this world now days therefore leaving independent woman or “alpha females” with no partner with an equal drive to hustle everyday to achieve greatness. OR the other situation that I have observed is an “alpha male” type choosing the simple/easy girl who causes the least amount of problems,..but honestly each time I see this, it back fires in the mans face. You see, a man with a strong personality needs a strong woman to challenge him, to help make him a better man and a better person in all aspects of his life.  A strong woman will question the things that he does, push him to be successful and achieve the goals that he has set for himself. She understands the struggles that come with taking over the world and knows that some days just aren’t his day, she understands because she too has days when the world just simply kicks her ass. And on the days that he is down, a truly strong woman will see that look on his face, say absolutely nothing and make sure that there is plenty of scotch in the liquor cabinet to kill a small village.

A power couple consists of a man who is confident, almost even cocky sometimes because he knows how good he really is at what he does. He demands respect without ever saying a word and because of the integrity of his character, 9 times out of 10, he gets that respect. And the other half of the couple is a strong-minded, independent woman who is the perfect mix of a trophy wife and a CEO. She is a smart, strong, successful woman with just the right amount of sass to keep you on your toes. It is not always easy to be the counter-part to a person with a powerful position or demeanor. It takes a special kind of person to handle being the woman on the arm of a powerful man. She is a self confident, powerful individual who knows how to work a room to stand strong next to a man who holds a position of power and still be able to hold her own, all while not getting intimidated and still be able to be present, classy, and impressive in a conversation by his side. He may be an impressive person in his field or industry but sometimes that pressure is a heavy one to carry and when the woman on his arm can take that attention and truly handle it for a moment or two, he gets the rare chance to breath. And this is one of the hidden gems of a true power couple, unspoken understanding of the others position.

Sadly, statistics show that the alpha male typically fails to choose the correct woman to share his life with due to unspoken fear or lack of desire to put in the effort to pursue such a complex woman. As the rise of strong woman who live well into their 30’s, 40’s and 50’s while remaining single and successfully taking over the world on their own, I hope that the men of this world can open their stubborn eyes and get with the program. The way I see it, this world needs more power couples!